From the lowest corporate tax to Irish famous appetite for fun, Dublin’s startup ecosystem has a lot to offer to tech startup founders, international businesses and those who are looking for jobs.

In the 18th century, The Grand Canal Docks area in Dublin was the world’s largest docks in the world. Within a few decades, the place fell into decline until the largest tech companies settled their EMEA headquarters here. In 2004, Google moved in, which is believed to be the reason for the major shift for investment in Dublin as Twitter, Facebook and other big Silicon Valley names chose to settle nearby. Following 2007 Ireland’s economic crisis, The Grand Canal Docks rose to prominence once again and were dubbed ‘Silicon Docks’, starting its second life as a home to high-tech multinationals such as Facebook, Twitter, Airbnb, LinkedIn and many more. It grew into Dublin’s smart district with 500+ businesses, 40K+ employees generating 9% of Ireland’s GDP and plans to attract 3 billion euros in private investment by 2025.

Thanks to the governmental effort to welcome new businesses and support creation of a more diverse job market, Dublin has the most attractive corporate tax rates in the world – just 12,5 %!  R&D expenditure generates a 25% tax credit for offset against corporate taxes in addition to a tax deduction at 12.5% — this means that companies can claim a refund of €37.50 for every €100 worth of R&D expenditure.

Startup Refunds for Entrepreneurs, Short Term Enterprise Allowance, Three-year corporate tax exemption, Start Your Own Business scheme, Innovation vouchers – just a bit of what Irish government has to offer to entrepreneurs and tech talent (check out the full list here).

Amogh Sarda moved to Dublin a year ago from Sydney, Australia, to work as a product manager for Intercom (their messaging platform is one of the biggest startup success stories created by Irish entrepreneurs, but founded in California). Moving to Dublin, he didn’t have many expectations, and working at Intercom seemed like a good opportunity. “But I was surprised to get here and see how much is happening,” he tells.  According to Sarda, product development is still in its infancy . “We need more engineering talent.” – he says.

The presence of multinationals is both a blessing and a curse. On the one hand, Dublin profits from their expertise, their wealth and business opportunities tech giants have created. On the other hand, multinationals tend to “steal the spotlight” from startups that need space to grow.

Rory Byrne, founder at Metro platform (a platform allowing people to generate their own data anywhere online), started his company straight after graduation while most of his peers decided to go for a well-paid job at one of Dublin’s multinationals headquarters. “Here you learn to get a good education to find a job, so you have money to enjoy your free time,” – says Byrne, pointing out that entrepreneurial culture hasn’t yet fully flourished in Dublin. However, he is optimistic about the positive cultural changes with initiatives like Launchbox, Trinity college startup accelerator.

Already in 2014, Ireland-based King Digital went public in March at a $7B valuation, reminding the rest of the world that European tech companies are making big waves. Now, Dublin is building a reputation as Europe’s center of enterprise software, Travel Tech, B2B, SaaS, AI, Fintech and more – over 2500 tech startups and over 165 hubs and accelerators.

Last year saw almost 200 VC deals completed and around €930m was invested in 223 companies across Ireland. However, the big funding rounds of well-established tech companies distort the overall investment picture and mask the current problem – the growing decline in VC funding for early-stage and seed level tech startups. This problem is now being addressed by Ireland’s €175m Seed and Venture Capital Scheme to help grow the amount of seed and venture capital for startups. Access to finance for female entrepreneurs is also still to be improved – women-founded companies got just €97.7M out of the overall €930M investment pool. 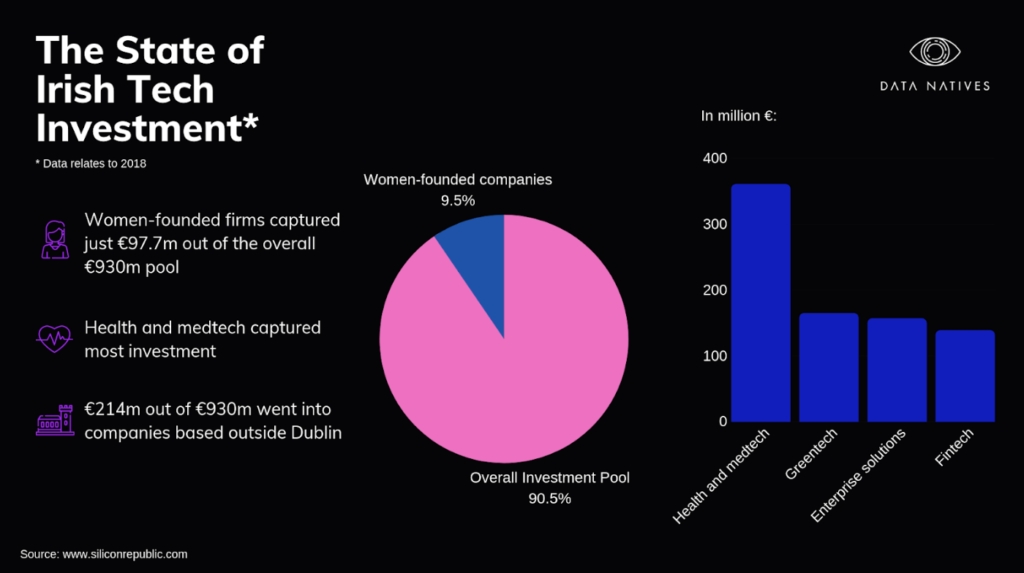 Challenges aside, Dublin is one of the startup cities full of opportunity. With Brexit, there might be a greater influx of companies looking to move their EMEA headquarters to Dublin, setting the economy to boom. For instance, Dublin is the top location post-Brexit for financial firms – 27 companies have already committed to relocating staff or operations to Dublin since the Brexit vote.

Even though Dublin is far from being a “heavyweight” tech hub, it is definitely a place to consider moving to start a company, get involved in R&D, or find a job in one of the city’s booming startups.

Plus we haven’t even mentioned the culture, food and landscapes. What’s holding you back?