The New Ways of Working; the Power of Data and the Future of AI: Highlights of DN19 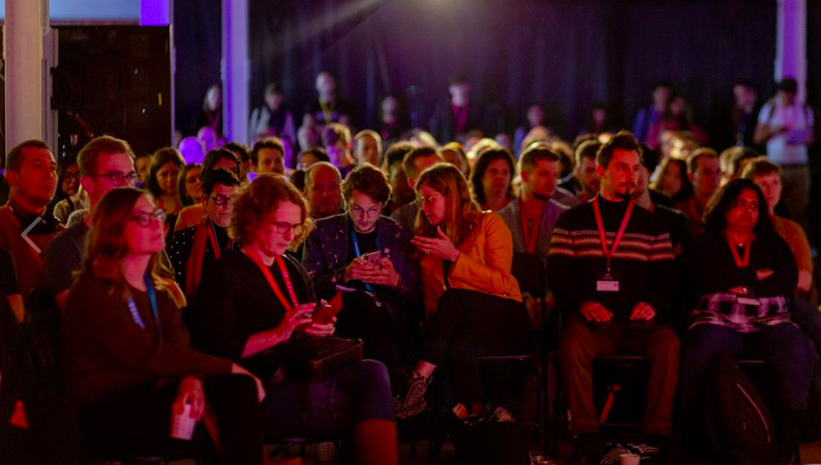 Strolling through a packed, sold-out Kühlhaus, a historic ice factory and Berlin landmark that was originally built in 1901 and is hosting the Data Natives conference for the 3rd time, there was much to intake from the worlds of Machine Learning, Artificial Intelligence, and Data.

During the 7 days of 25+ satellite events, 8,5 hours of workshops, 8 hours of inspiring keynotes, 10 hours of panels on five stages and a 48 hours-long hackathon, over 3500 data enthusiasts, professionals, founders and experts met, engaged and learned from 182+ speakers.

It all started with the opening talk from our founder Elena Poughia at the Future Stage, as she laid out this year’s untheme. After last year’s focus on “quickening” at Data Natives, this year we decided to take a breath and explore “what makes us tech” and where do we stand in the fast-changing world.

“Really, what we need is to slow down and understand what all of this is,” Elena Poughia said. “We should take a moment of introspection, to understand how we can make an impact.”

As we are fundamentally changing our societies, the way we think, work and live through technology, Data Scientists have the responsibility to become Data Ethicists. At our new Impact Stage, we set out to explore a better world through tech, together with you. As we believe our diverse community can change the world.

The future of work

Raffaela Rein, Founder of WildWildVentures, believes there is a reason to be excited about the future of work. According to some studies, an astonishing 85% of employees isn’t really engaged with their work. When she founded her company, she wanted to turn this number. But after a lot of experiments in her company with transparent salaries, flat hierarchy, and peer promotion, employee engagement wasn’t going up but down.

Data turned out to be the jackpot, through something as simple as an employee survey. “Most companies have them as a pulse check,” she said. “But how many companies use it as a leadership tool?” According to Rein, looking at this data forces managers to really think: what does my team need? Then steps can be taken to improve the culture in the company to make the workspace a place where every employee feels at home.

Winkler found that 70% of workers in Germany want to have more flexibility in terms of time and place. But she sees that most companies, whether traditional companies or even startups, are not willing to embrace flexibility yet. Bischoff thinks that will change:

“There are now more millennials in the workforce in the US than boomers. So there will be a massive change in the way we are going to work.”

According to Yassin, it is also about the maturity of an organization that determines the amount of flexibility possible. “You need to ask yourself: where are we standing?” – she tells. “”We also need to meet physically and be emotionally connected to our workplace. We can’t just look at screens.”

At the end of the panel, the audience was sent on a mission to envision a workday in 2050. What did they think about? Automation of repetitive tasks, more space to work with the mind and heart, shorter work contracts, optimal use of time and more say for employees.

The power of data

Nusbaum explains that intelligence is about the connectivity of the brain and the attempt to reduce uncertainty by calculating probabilities.

Every 300 milliseconds the brain refreshes and chooses a specific network to use. This connectivity is what AI is missing. “I think AI is clever, but only in its field. As humans we are able to contextualize, AI can’t.”

In her talk, Agnieszka Michalik spoke about the power of data in explaining the gender pay gap. Germany has the highest gap with women earning on average 21,5% less salary than men. But this number doesn’t explain the reasons. Those who don’t believe in gender discrimination argue that women work parttime more often, have less experience, or prefer low paid jobs. That’s why Michalik decided to search in the data.

She found that gender discrimination is a fact. When she compared the hourly wages in Berlin, there was a clear gap, especially in high job levels. One discover was that even though more women work in the legal sector (60%), they earn 34% less on average than men.

“I believe its important to have more data to be able to analyze  the causes”, she says. “Looking at data is the way to go, rather than people just interpreting the situation.”

The future of AI

One hot topic this year was the future of AI. We had panels on ethical AI and gender bias and senior Charite researcher Vince Madai talked us through ethical AI in healthcare.

Dr. Susara van den Heever, Executive Decision Scientist & Program Director of the IBM’s Data Science Elite team, told us about Norman, the first psychopathic robot. He was trained on images from the darkest side of the internet, to show the dangers of biased AI. “But the real danger is projects that often start with good intentions”, she tells. “We need to build AI that can detect and fix bias.”

According to Toby Walsh, professor of AI at the TU Berlin, determining what is fair in AI can be difficult.

In mathematics, we have 21 definitions of what fair actually is. For example, you can put as many men as women in high rankings, or you can focus on putting an equal amount of men in high and in low positions. “We can’t eliminate bias. But we should make sure not to select on the basis of gender, race, handicap and so on.”

He thinks that when it comes to small decisions it’s acceptable for AI to make mistakes and we should learn from this. But when it comes to fundamental decisions, such as whether someone gets a credit rating or a visa, it can’t be made by a machine. “That’s a job for a human, a machine should never take that role.”

Most important, he says, is that we have more inclusive teams working to shape our future in AI. Now, there are just 22000 people in the world with a Ph.D. in AI, mostly male and white, who are deciding what our future will look like.

At the Impact Stage, doctoral researcher in AI Gunay Kazimzade looked into bias and outlined an action plan for ethical AI. First, transparency is needed. This comes through a transparent process, explainable AI and interpretability for each stakeholder. Another important aspect of her action plan is education, through training of workers, but also to get the ethics of AI integrated into technical universities, something many are lacking so far. Last, regulations are needed.

What do you think? How do you envision work in 2050? Leave your thoughts in the comments and let’s talk about it during DN2020. See you next year!

Check out the photo selection here.